Drug Testing Work Place Policy- Are you Compliant?! With MRO Dr.’s Review Board

What you need to know about Drug Testing

Illegal drug usage has become more, and more prevalent. Drug users are very often people with with other serious problems. Drug use can lead to money problems, which could result in theft issues in your workplace, lost productivity time, and accidents. This can lead to needless Workers’ Compensation claims and other strains on your company’s bottom line.

Most people have heard of some of the more commonly abused street drugs: Amphetamines, Barbituates, Cocaine, Marijuana, Opiates, etc. However, these drugs are not the primary cause of lost productivity, tardiness, missed work, and accidents in the work place.

The drugs that are the biggest menace to employers nowadays are the prescription pain killers and many law-abiding citizens may be in possession of these drugs. Drugs such as Demerol, Percocet, Oxycontin, Percodan, Vicodin, and Dialaudid are causing issues in the workplace every day. The only way to detect these drugs is with expanded panels to a urine-based or hair drug test. A 12-panel drug test will look for most of the drugs that are causing problems today, including some of the new drugs being abused like MDMA, also known as Ecstasy.

“So”, you may ask yourself , “what does it matter if a job candidate or employee has a legitimate prescription for the drugs found in their system?” It doesn’t matter, PROVIDED the amount of the drug found in the person’s system is at a level that is consistent with the amount prescribed. So, if we find that a candidate tests positive for Percocet, the first thing we ask for is a prescription, if the prescription exists and is current, we look to see that the amounts of Percocet found in the candidate’s body do not exceed the amount of the prescription. If the candidate has a prescription for a drug where they take 1 – 150 mg capsule per day, and it’s discovered that there was 600 mg. in their body, then the result of that drug test is POSITIVE. Federal law stipulates that all prescription medications must be administered (whether self-administerd or otherwise) in a manner that is consistent with the directions on the prescription label. Technically, the law is broken when the directions are not followed. This may not raise eyebrows for many medications, but this becomes much more significant with Class II (controlled substances). Furthermore, just because a job candidate has a legitimate prescription for a Class II drug that is not being abused, doesn’t entitle him/her to work any job. Operating heavy equipment, may not be an option for someone with an Oxycontin prescription.

All drug test pricing offered by HR ProFile includes the MRO (Medical Review Officer), regardless if the results are positive or negative. This is a service that may involve an extra fee with some of our competitors. The Medical Review Officer ensures that certain protocols were followed regarding the collection of the specimen and the MRO checks for temperature variances, dilutants, adulterants, and creatinines which could affect the results of the drug test.

To learn more be sure to tune in Tuesday, 6/19 at 2pm to discuss work place drug testing policies. Drugtesting.eventbrite.com 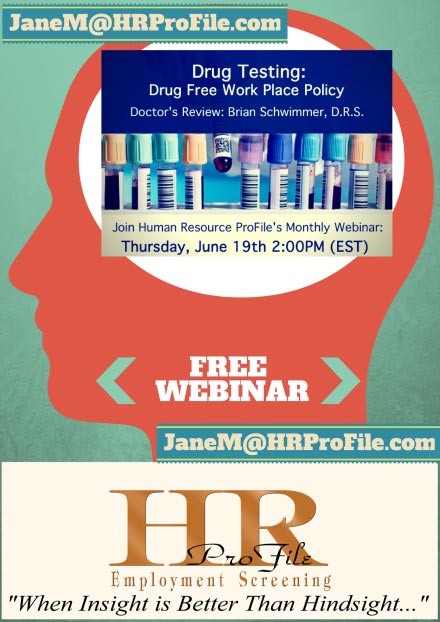