In a fast pace society, companies today know that time is money. The more time it takes to pre-screen, conduct background checks, hire, train, terminate, etc. – the more money. Money is not only monetary in terms of dollars out the door, but also the loss of precious productivity profit. So, should some checks be skipped? Is it really necessary to conduct drug

testing? The short answer is - yes it is - because, “according to the National Survey on Drug Use and Health (NSDUH), an estimated 20 million Americans aged 12 or older used an illegal drug in the past 30 days. This estimate represents 8% percent of the population aged 12 years old or older. Illicit drugs include marijuana/hashish, cocaine (including crack), heroin, hallucinogens, inhalants, or prescription drugs used without a prescription. Furthermore, the “government's annual Household Survey on Drug Abuse in America (reports), over 75% of illicit drug users are employed full or part-time.” In addition, according to the CDC, “over 15% of U.S. workers report(ed) being impaired by alcohol at work at least one time during the past year, and 9% of workers reported being hung-over at work.

Put this high percentage of drug abuse into associated costs that include absenteeism, decreased productivity (due to poor work performance), turnover, accidents, and increased health care costs and the impact is staggering! Drug abuse costs employers $81 billion annually3 and alcohol misuse in the United States was estimated to be $185 billion. About $16 billion of this amount was spent on medical care for alcohol-related complications (not including fetal alcohol syndrome [FAS]), $7.5 billion was spent on specialty alcohol treatment services, and $2.9 billion was spent on FAS treatment. The remaining costs ($134 billion) were due to lost productivity. Lost productivity due to alcohol-related deaths and disabilities impose a greater economic burden than do health care costs.

The NCADD reports a few other shocking statistics that include:

So, is prevention worth the cost? Although drug testing does cost a company time and money – it may also “weed” out bad hires and save companies money in the long run.  For example, “the US Navy claims that its drug-free workplace program, which includes random drug testing and costs approximately $20 million a year, has reduced the number of sailors who use drugs and abuse alcohol by more than 57%. That equates to a savings of more than $210 million every year. In other words, the Navy claims it realizes a savings of approximately $10 for every dollar it spends on drug testing.”

This is a huge savings! Our trusted partner, Labcorp, offered this 2-step calculation to see the potential ROI from Drug Testing. 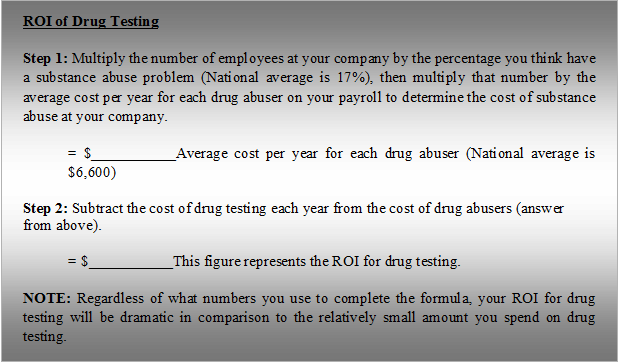